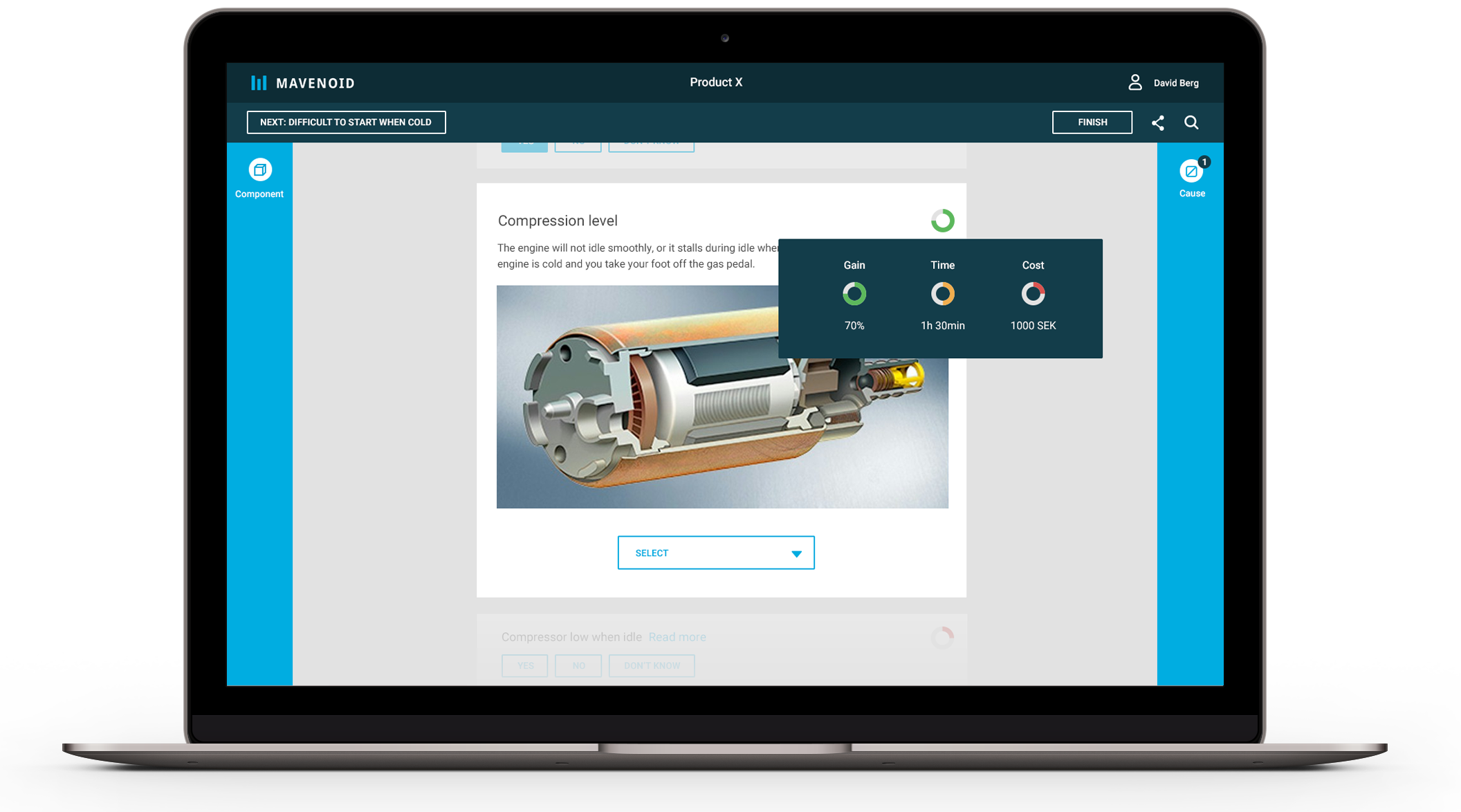 “The fundraising event is a major event for the company that will allow us to build up our engineering team further and also to expand to new markets,” says Gintautas Miliauskas, Co-founder of Mavenoid.

Mavenoid has started to establish itself as the future of technical support. Since launching less than a year ago, the company has signed deals with seven of the largest enterprises in the Nordics. Founded by two former Palantir employees, the company’s technology was born out of a diagnostic platform developed at the Swedish Institute of Computer Science in close collaboration with the Swedish Armed Forces to help mechanics repair tanks and terrain vehicles.

Mavenoid automates technical support with a virtual agent on the company’s support website, or app. It works much like a veterinarian for technical products, narrowing down the possible solutions to the problem by asking the human owner diagnostic, multiple-choice questions.

For example, if your equipment has trouble turning on, the Mavenoid-powered technical support might ask simple and structured questions that would diagnose the issue in the electrical system and provide the solution to fix it. Answering structured questions provides instant technical support that’s actually useful, and is much faster than expressing a technical problem in your own words, which is why chatbots can be so frustrating.

The company has quickly established itself with industrial players due to the reduced support costs and resolution times of automating common, but often complex troubleshooting tasks. This frees up customer service agents to focus on solving problems requiring a human touch. Another benefit is that Mavenoid takes days to deploy, not months. This is done by combining human knowledge with machine learning, using experts to bootstrap a simple model in order to start learning from customer interactions as quickly as possible. It’s troubleshooting-as-a-service, not a big IT project.

“Shahan and Gintas combine technical excellence with strong commercial ‘DNA’ and a unique vision for the future of technical support,” says Christoph Janz, Partner at Point Nine Capital and the first angel investor in Zendesk, the leading customer service platform. “I couldn’t be more excited to join them on their mission to build the best troubleshooting-as-a-service product in the world.”

Shahan Lilja, CEO and Co-founder of Mavenoid, adds, “I’m thrilled to have Point Nine Capital and Creandum join us on our mission to fix things faster, particularly because of their deep expertise in SaaS and scaling companies from the Nordics.”

When it comes to competitors, G. Miliauskas says “There are several other companies that are in a similar space to ours, but they take slightly different approaches. Some of them try to build sophisticated quantitative probabilistic models of faults in machinery, however, that makes the system setup much more involved. Training those systems requires understanding and estimation of conditional probabilities, which is difficult to do for their clients, so their product is more bespoke and more specialised. We aim for the 80/20 solution, with 80% of the benefit for 20% of the cost. On the other side of the market you have chatbots and simple information lookup systems, but they are often limited to a single exchange (you pose a question, and the system suggests a bunch of relevant articles). Our system is intended to guide the user through the problem discovery process rather than simply expect them to enter all of the information by themselves.”

With today’s funding, the company plans to make its virtual agent available via more channels, and expand outside of the Nordics. Mavenoid is currently hiring for both technical and non-technical roles in Stockholm.