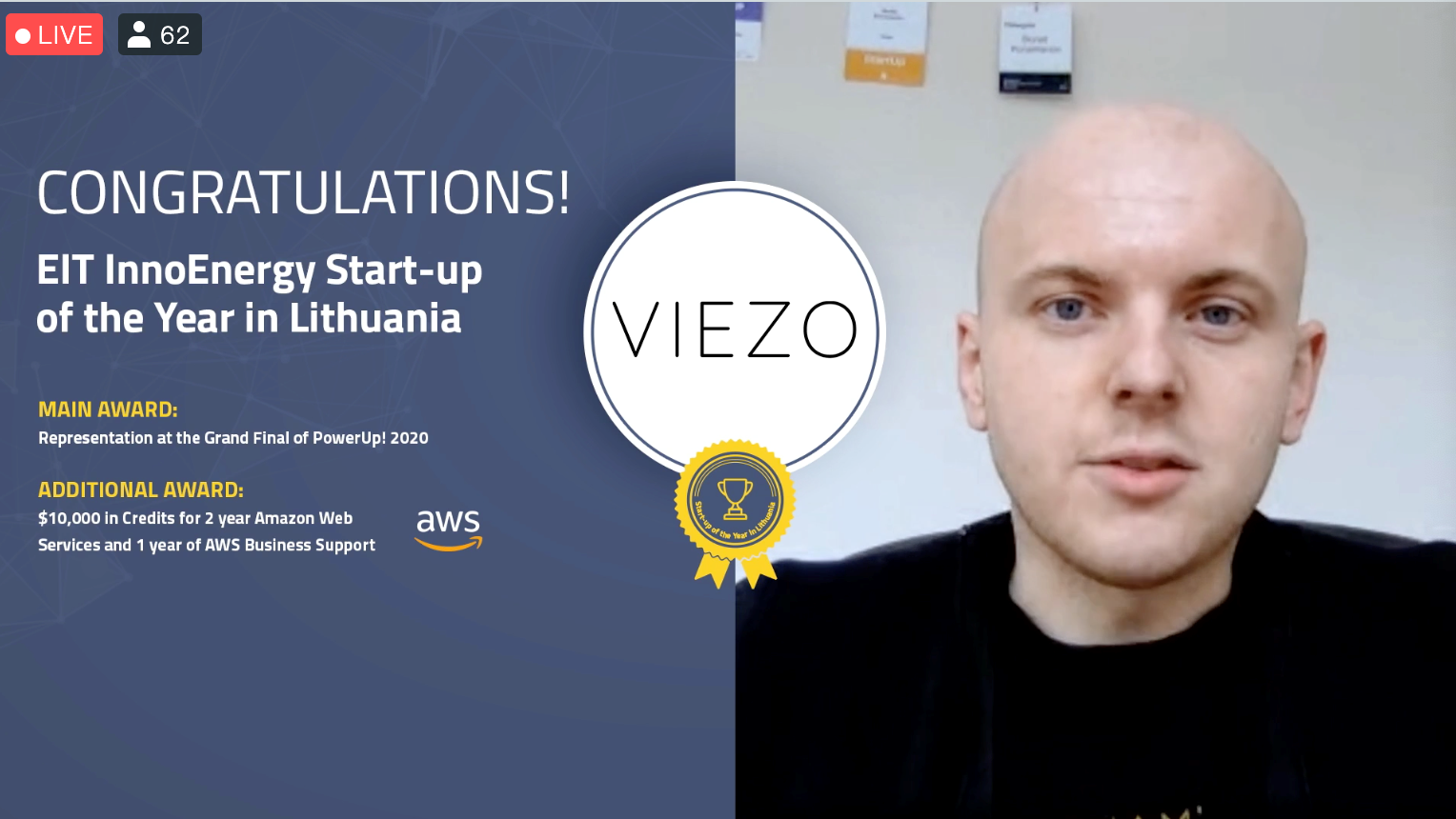 Viezo has been announced the winner of the Lithuanian national final of the EIT InnoEnergy PowerUp! Challenge initiative. The Viezo team, named Lithuanian Startup of the Year, will go on to represent the country in the international Grand Final later this year. The award for the most innovative energy startup went to Gasvolta.

Viezo was awarded the title on Thursday, after Lithuania’s exciting online national final of the EIT InnoEnergy PowerUp! Challenge. The initiative was launched in January to find the most innovative startups, scale-ups and SMEs in Central Eastern Europe. Out of a record 425 applications by companies from 24 countries, a total of 362 startups qualified to participate in the tournament. In Lithuania, seven teams were in the running for the national title.

The winners, Viezo, will go on to represent Lithuania in the international Grand Final of the PowerUp! Challenge in Krakow, Poland, organized by European Union Network for the Promotion of Sustainable Energy Innovation, EIT InnoEnergy. Another Lithuanian startup, WellParko, won second place at the same event two years ago.

Gasvolta, named the most innovative energy startup of the year in Lithuania, won a prize of EUR 1,000 funded by the Ministry of Energy of the Republic of Lithuania.

“By contributing to PowerUp! Challenge, we express our support for the Lithuanian startup community – growing, strengthening and creating the technologies of the future,” says Minister of Energy, Žygimantas Vaičiūnas. “Innovation is one of the priorities for Lithuanian energy. The Ministry seeks to create the most attractive and friendly ecosystem possible for the development of energy innovations and the implementation of innovative ideas. We are working actively in that direction.”

For the first time in the event’s history, the winner of Lithuanian PowerUp! Challenge final and Lithuania’s most innovative startup were announced online in a live video conference via the platform Vimeo.

“The energy industry is relatively traditional and old-fashioned, but due to global warming and many countries’ newfound energy independence, the creation of new energy sources and technological advancement becomes more and more important,” says Roberta Rudokienė, Manager of Startup ecosystem expansion department StartUp Lithuania at Versli Lietuva. “The highly complex nature of this field requires specific expertise, therefore initiatives of this kind are important for the spread of news about possible innovations and technological implementations, as well as and incentives to develop solutions or products in this field. We are delighted with the number of participants and the fact that seven Lithuanian startups made it through to the final!”

Viezo, the startup that won the main prize in Lithuania’s PowerUp! Challenge, was founded in 2018. Its work includes developing new types of material that can produce energy from vibrations, and use this instead of batteries. Gasvolta, the winner of the Ministry of Energy prize, creates innovative electric vehicle charging stations, that provide electricity produced using biomethane. The audience prize went to Water Shield, a startup that invented a waterfall-like device for air purification in large public areas.

The delighted CEO and founder of Viezo, Donat Ponamariov, shared his thoughts after the ceremony: ”We are very happy and also grateful to our team, the jury and everyone who watched the event. The next step for us is to win the Grand Final. Let’s go for it!”

The national winners of the contest from each country will now go on to compete in the international Grand Final, with financial prizes of up to EUR 65,000 and the title of CEE Startup of the Year – as well as valuable assistance from key partners including Amazon Web Services, Revolut and the SpeedUp Group. The initiative also provides startups with a springboard to secure millions of euros in investments and become part of EIT InnoEnergy’s network, which offers money, know-how and an extended network of trusted partners to help businesses thrive and become successful globally.

“Competitions and incentive programmes play a key role in the crisis survival plan of innovation and startup companies,” says Kęstutis Morkūnas, Branch Director for InnoEnergy in Lithuania. “Innovation companies and others have difficult times ahead of them. As these companies are still in the investment or product development stage, their need for support is considerably larger than that of already well-established companies.”.

Decisions as to the timing and venue of the international Grand Final will be made later, depending on when restrictions currently imposed by governments in the region are relaxed.

More information about the EIT InnoEnergy PowerUp! Challenge is available at: https://powerup.innoenergy.com/