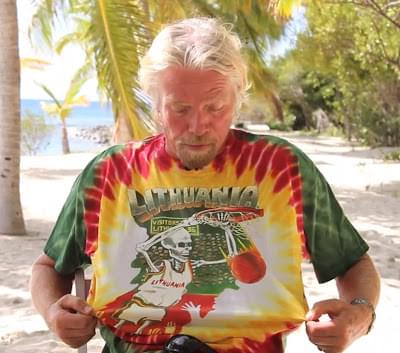 Sir Richard Branson is coming to Lithuania (video)! Not exactly directly startup related, but very good news. At least for me, I am a fan

Read more about it here. Big thanks for making this happen goes to Vladas Lasas!

In the photo sir Richard is showing off his t-shirt, which Lithuanian Olympic basketball team wore in the ’92 Olympics in Barcelona – the 1 st Olympics where Lithuania participated just after breaking out of Soviet Union.

Cudos to organizers TechHub Riga, they did a great job. Follow #TCBaltics @TCBaltics for photos, videos and presentations from the event.

Among all the cool folks who came down to TCBaltics was Yevgeniy Brikman, software developer @ LinkedIn – thanks to Enterprise Lithuania who made it possible for him to visit HUB Vilnius in Lithuania and TCBaltics in Latvia. Yevgeniy (or Jim) describes himself as ”Hacker, writer, designer, code monkey, architect.” in his LinkedIn profile, but he is also a great talker and presenter, check out one of his presentations in his Slideshare.

Lithuanian startup CGTrader – a marketplace for 3D artists and engineers, where one can sell, buy or download free 3D models for projects and 3D print is going to be 2 years old next months! To celebrate CGTrader is announcing a3D model competition for designers:

This is great news to whole Lithuanian startup scene, not only TransferGo. When investors like Greg Kidd get involved in local companies on equity level, it also adds visibility and credibility to our community.

“Lemon Lab’s new app, “Check for appFigures”, solves the problem of having to browse the appFigures desktop-sied website using an iPhone, by bringing key statistics to a downloadable iOS application. The app offers a clear and simple overview of importnat metrics like app downloads, updates, and sales.”

One of the reaction from Lemon Labs team members in Facebook:

“On the other news, Lemon Labs on TechCrunch again. Once again an awesome Monday.”

I should have covered this in the previous update from Lithuania startup community, but better later, than never -weather app Orai developed in the last App Camp reached phenomenal success in Lithuania on all 3 main platforms – Windows, Android and iPhone.

Sorry if I missed anyone – drop me a line in Facebook, Twitter or LinkedIn and I’ll write about you next time!